Welcome to the first installment of my brand new feature: a book review. Out of habit, I look over the new non-fiction releases at my local library. I often find useful items, frivolous reads, and a wide range of biographies. My goal: to glean the information relevant or inspirational for work in the art, design, and graphic fields. Perhaps this will steer readers to works that they didn’t know could add some useful tidbits for their work. Even better, it might be something fun! 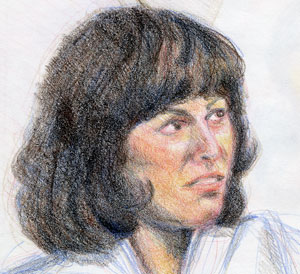 Last week, as I skimmed the current offerings among the new releases I found gold: Elisabeth Sladen: The Autobiography. “Wow – Sarah Jane!” I snatched the book up faster than a sonic screwdriver could open a locked airlock. For some readers, an explanation is needed regarding that last sentence. (For Doctor Who fans, none is required.) Elisabeth Sladen is most known for her portrayal of Sarah Jane Smith on the British science fiction show Doctor Who. Sarah Jane is one of the most popular — if not the most popular — companions who traveled with the Doctor through space and time. She was forthright, gutsy, definitely her own woman, and amazingly, a mere human. For non-Whovians, aliens abound in Doctor Who adventures! And Sarah could give as good as she got. She was such a positive role model for me, I admit to copying her hairstyle for a while in college. As she was in the series during the 1970s, and I was doing the do in the 1980s, I was a walking anachronism. Since my hero and heroine were time travellers, I didn’t mind.

I was excited to see Ms. Sladen had an autobiography, and couldn’t wait to get it home. She’s always given intelligent interviews with a good dose of humor, and had reprised the role of Sarah for her own series. I settled down to read, skimmed over the book’s dust jacket information and then let out a gasp. Elisabeth Sladen had died April 2011; this autobiography was published a few months later.

My review of Elisabeth Sladen: The Autobiography will be in the next post. This installment is my tribute to a childhood heroine of mine. Good-bye, Sarah Jane.

We use cookies on our website to give you the most relevant experience by remembering your preferences and repeat visits. By clicking “Accept”, you consent to the use of ALL the cookies.
Cookie settingsACCEPT
Manage consent

This website uses cookies to improve your experience while you navigate through the website. Out of these, the cookies that are categorized as necessary are stored on your browser as they are essential for the working of basic functionalities of the website. We also use third-party cookies that help us analyze and understand how you use this website. These cookies will be stored in your browser only with your consent. You also have the option to opt-out of these cookies. But opting out of some of these cookies may affect your browsing experience.
Necessary Always Enabled

Performance cookies are used to understand and analyze the key performance indexes of the website which helps in delivering a better user experience for the visitors.

Analytical cookies are used to understand how visitors interact with the website. These cookies help provide information on metrics the number of visitors, bounce rate, traffic source, etc.

Advertisement cookies are used to provide visitors with relevant ads and marketing campaigns. These cookies track visitors across websites and collect information to provide customized ads.

Other uncategorized cookies are those that are being analyzed and have not been classified into a category as yet.