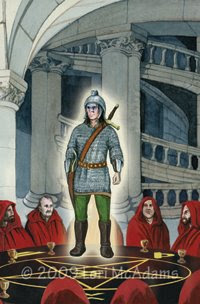 Hello and welcome to my first blog entry!

I thought I’d start out with the story of how my husband faced more danger as an artist’s model than all the years he spent working on a loading dock.
I was working on an illustration assignment:  a sword and sorcery fantasy book cover. As usual, my husband David was my model. Dressed in a hooded cape, he posed as all the evil wizards, taking various poses.  To model the hero, he dressed in a medieval-style tunic, with a replica sword and scabbard across his back. We had borrowed this beautiful, replica sword from his brother,who collects such historical replicas. They are kept in pristine condition: they are oiled, they are sharpened.
Yes, we now realize how stupid this was.
When David finished posing, he leaned over to pick something up, and the sword slipped out over his back, moving in front of him. Instinctively, he reached out to catch the sword. He missed the hilt and grabbed the blade. He immediately ran down the hall to clean his “minor cut.” There was a large trail of spattered blood along the hall to the bathroom. It was “CSI: Belmont.” Having seen the blood, I gathered up my purse and his insurance information, and drove him to the county hospitals’ emergency room.
At the hospital, several clerks, nurses, and doctors came to hear him describe what had happened. All of them were amazed except for one doctor from Brooklyn, who had tended to several sword injuries in that borough. Apparently, sword fighting occasionally erupts in Brooklyn ever since Highlander screened in the ’80s.
David told all his coworkers that he cut his in a bizarre cooking accident. “I was grilling,” he said, “and this big knife fell off the grill towards my wife, and I rescued her.”
I’ve posted a picture of the book cover. The medical bills exceeded the payment from the publisher by a few hundred dollars. What we learned, however, is priceless: I now insist on plastic props for any modeling.
My husband’s hand is now fully healed. Poor David still carries the brunt of our great moment of stupidity. Whenever he’s preparing food or doing simple yard work, friends and family always tell him to take care with the knife.

We use cookies on our website to give you the most relevant experience by remembering your preferences and repeat visits. By clicking “Accept”, you consent to the use of ALL the cookies.
Cookie settingsACCEPT
Manage consent

This website uses cookies to improve your experience while you navigate through the website. Out of these, the cookies that are categorized as necessary are stored on your browser as they are essential for the working of basic functionalities of the website. We also use third-party cookies that help us analyze and understand how you use this website. These cookies will be stored in your browser only with your consent. You also have the option to opt-out of these cookies. But opting out of some of these cookies may affect your browsing experience.
Necessary Always Enabled

Performance cookies are used to understand and analyze the key performance indexes of the website which helps in delivering a better user experience for the visitors.

Analytical cookies are used to understand how visitors interact with the website. These cookies help provide information on metrics the number of visitors, bounce rate, traffic source, etc.

Advertisement cookies are used to provide visitors with relevant ads and marketing campaigns. These cookies track visitors across websites and collect information to provide customized ads.

Other uncategorized cookies are those that are being analyzed and have not been classified into a category as yet.